Lying on a Trolley in a Pair of Paper Knickers sounds like a title in the vein of The Hundred-Year-Old Man Who Climbed Out of the Window and Disappeared. As it happens it was me on the trolley. The consultant was threading a laser through a slit in my leg. We were chatting about books, and he recommended Hundred-Y-O Man. He also said that he was drawn to the quirkier titles at the airport, which goes to show that there is something to be said for odd titles and that consultants frequent airports while writers (at least this one) knock about on push bikes.

All this is apropos of The End of book 3. It’s actually been finished for some time bar the title.
My first choice of title was borrowed from a WB Yeats’ poem, but The Stolen Child had already been taken – twice. Always check before naming your baby. There are 25 books on Amazon called Hidden or The Hidden.

There is plenty of online advice about choosing a title but it wasn't helping much. Titles seem to fall into five categories:

Second-hand: Borrowed from poetry, scripture or sayings, sometimes with a twist.
East of Eden, Gone with the Wind, His Dark Materials

Classic: I'll throw the rest in here. Mostly short and relevant without being genre specific.
Sons and Lovers, Little Women, War and Peace

I asked some readers what worked for them.

Most of my sample agreed with my nearest vascular surgeon. They liked quirky. Fried Green Tomatoes at the Whistle Stop Cafe and Love Death and Vanilla Slices got a mention. Writer/blogger Anne Cater's favourite is Her Giant Octopus Moment. It’s intriguing and humorous without being ridiculous. Its author, Kay Langdale, explained how it fits her book's theme:

'The title was inspired by the Giant Pacific Octopus's reproductive habits. The female lays her eggs in a crevice of rock, and during the seven months it takes for them to mature, she protects them from sea-stars and crabs, and cleans and aerates them. At the point of hatching, she helps ease them from their jelly casing, and wafts them outwards and upwards to help them swim away. Then, not having eaten or tended to herself for the duration, she dies.

'The image related to the book as a metaphor for the devotion, dedication and selflessness frequently demanded by motherhood. The central character in the novel, Joanie, is selfish and thoughtless in her decision making, and her child, Scout, is impacted upon by her choices. At the conclusion of the novel, Joanie has a Giant Octopus Moment when she makes a decision, for the first time, which is based on putting Scout first.'

Kay’s most recent favourite title is Karen J Fowler's We Are All Completely Beside Ourselves, which I agree is another cracker.

My personal favourite is By Grand Central Station I Sat Down and Wept. It’s the most loaded title I know. It encapsulates the book and trails atmosphere. Nine words evoke a detailed visual and a hangar-load of emotion. Unable to support the weight of feeling someone sits down to cry in a vast public space. All around are the miniature dramas of parting and arrival, the flux and impersonality of commuting. It’s a flash poem. Every word works. Wept is more touching than cried; the soft blending of wet and swept speaks of uncontrolled, copious tears. It’s unusual, arresting and full of pathos. It simultaneously awakens empathy and curiosity. Why is she crying? Why there? 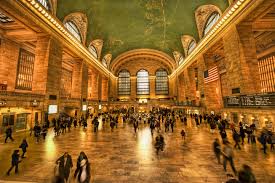 But longer and stranger isn't necessarily better. T S Eliot's working title for The Wasteland was He Do the Police in Different Voices. It gives some clue as to the ventriloquism of the piece but it makes me think of Spike Milligan. 'The Wasteland' sets the tone as arid, lacking in sustenance, without bearings.

Not all the favourites were attention seekers. Poet, Liz Brownlee, went for Snow Falling on Cedars for its ‘musicality, the deliciousness of cold and the comfort of the cedar smell, movement and softness, light and delicacy’.

Also, before I get carried away with Ukrainian Tractors and Electric Sheep I have to consider that my book is part of a series so it needs to match the other two which are simply names: Oy Yew and Nondula. Therefore, after due consideration, I’m going for a one-worder.