Barbie: feminist icon? Listening to her speak I think the answer must be, yes.

To all my Fans

***Look At All The Women by Cathy Bryant
Look At All The Women is now available to buy from: The Mother’s Milk Bookshop (as a paperback and PDF) – we can ship books around the world! and as a paperback from Amazon.co.uk. It can also be ordered via your local bookshop. If you’d like to know more about Mother’s Milk Books — our submission guidelines, who we are and what we do — please find more details here: http://www.mothersmilkbooks.com/ Please take the time to read and comment on the following fab posts submitted by some wonderful women: ‘Heroines and Inspirations’— Cathy Bryant, guest posting at Mother’s Milk Books, shares two of her own powerful, inspiring poems, and the stories behind them. ‘Sensitivity’ — Marija Smits shares a poem, with an accompanying image, that gives a glimpse into the inner workings of a highly sensitive person. Georgie St Clair shares her creative female heroines in her post ‘Creative Others: Mothers Who Have It All’ ‘The Eclectic Others – Or What Would I Have Been Without You?’ — Kimberly Jamison posts to her blog The Book Word a thank you to the women of literature and history who have been in her life, shaped her life, saved her life and gave her a future. ‘Barbie speaks out’ — Ana Salote at Colouring Outside the Lines shares a platform with feminist icon, Barbie. ‘Her Village’ — An older (much older than most) first time mother, Ellie Stoneley from Mush Brained Ramblings firmly believes in the old African adage that it takes a village to raise a child. To that end she has surrounded her daughter with the love, mischief and inspiration of an extremely eclectic bunch of villagers. Survivor writes about the inspiring life of La Malinche and her place in Mexican history at Surviving Mexico: Adventures and Disasters. Sophelia writes about the importance of her community as a family at Sophelia’s Adventures in Japan.

Bonobos are my heroines: putting the nature back into nurture


For me giving birth triggered an instinct. Despite the white-out pain I felt like an organism fulfilling its destiny. My double helix unwound into a track, leading back through aeons to my origins as some amoeboid coagulation of space dust. What I felt for my child was not as fickle as emotion; it was unwavering, fixed, a connection beyond will. Here was something I would defend to the death, not out of courage, out of instinct.

The mothering instinct is a powerful thing. The establishment, through the media, transmutes instinct to serve its own needs.

I have a collection of women’s magazines from the twenties. Child-rearing was mainstream; it had not been shunted to a specialism. The middle classes indulged an ideal of motherhood. Women wallowed and exulted in ‘chubby bundles of flesh, with tender creases, delicate gossamer layers and skin-folds as soft as silk’. They tenderly administered to their rosebud-mouthed ‘wee treasures’, fortifying them with bone marrow, egg yolks and cod liver oil. Motherhood was sacred, sensually delicious, emotionally fulfilling.

To keep her brain occupied and to ensure cultured companionship for hubby and dinner party guests the middle class woman of 1927 was allowed wider interests. Good Housekeeping ran articles on theatre, ballet, the law, the church, nature, current affairs, philosophy and children. The thermosetting qualities of plastic were discussed (if only to choose a plastic bowl), and complex probabilities (if only to be a skilled bridge player). Writers of stature wrote elegant pieces. Vocabulary was impressive. Sentences were of brain-training length and complexity. (I’ll admit that Woman’s Own was less wide-ranging and the seam of sickly, snot-nosed, extra mouths to feed; loved but often lost, was not acknowledged.)

(Secondary function: economic unit. If she wants a shot at mothering, it’s up to her to fit it round the other stuff before the eggs run out. Apprenticeships in motherhood + the benefit system available to the poorly qualified.)

We started it ourselves. Feminism homogenised us with the male. It suppressed the instinct that would keep us in the home, pushing us out into the arenas of power. The status quo creaked, stalled, adjusted. Patriarchy could no longer distract us with stay-at-home motherhood, but another instinct would do just as well. Mating displays were transmuted into a narrowly defined Sisyphean goal: to look like an elongated child with G cups, from age 14 to 90. Air-brushed slebs fix the goal before our eyes. To keep the ball rolling back downhill our food supply is adulterated with an addictive lipogenic fat:sugar ratio called the bliss point. Bonus: fashion, dieting, cosmetics and surgery are massively lucrative. (And now to ensure that men have the same fantastical standards, their instincts are distorted by unlimited free porn.)

We fuel it ourselves. We write it. We pay to read it. Women's mags, columns and pages are obsessed with appearance. Can there be anything left to say? It’s like an autistic monomania: bingowingscrowsfeetthighgapthreadveinkneewrinklesbikinibridgenanoblurring...
Stop it!

Contrast this with 1927. Health and beauty occupied two pages out of 258. The article ‘Banishing Liverishness’, is about anatomy, biochemistry, diet (not the weight loss kind) and exercise (the liver massage kind). 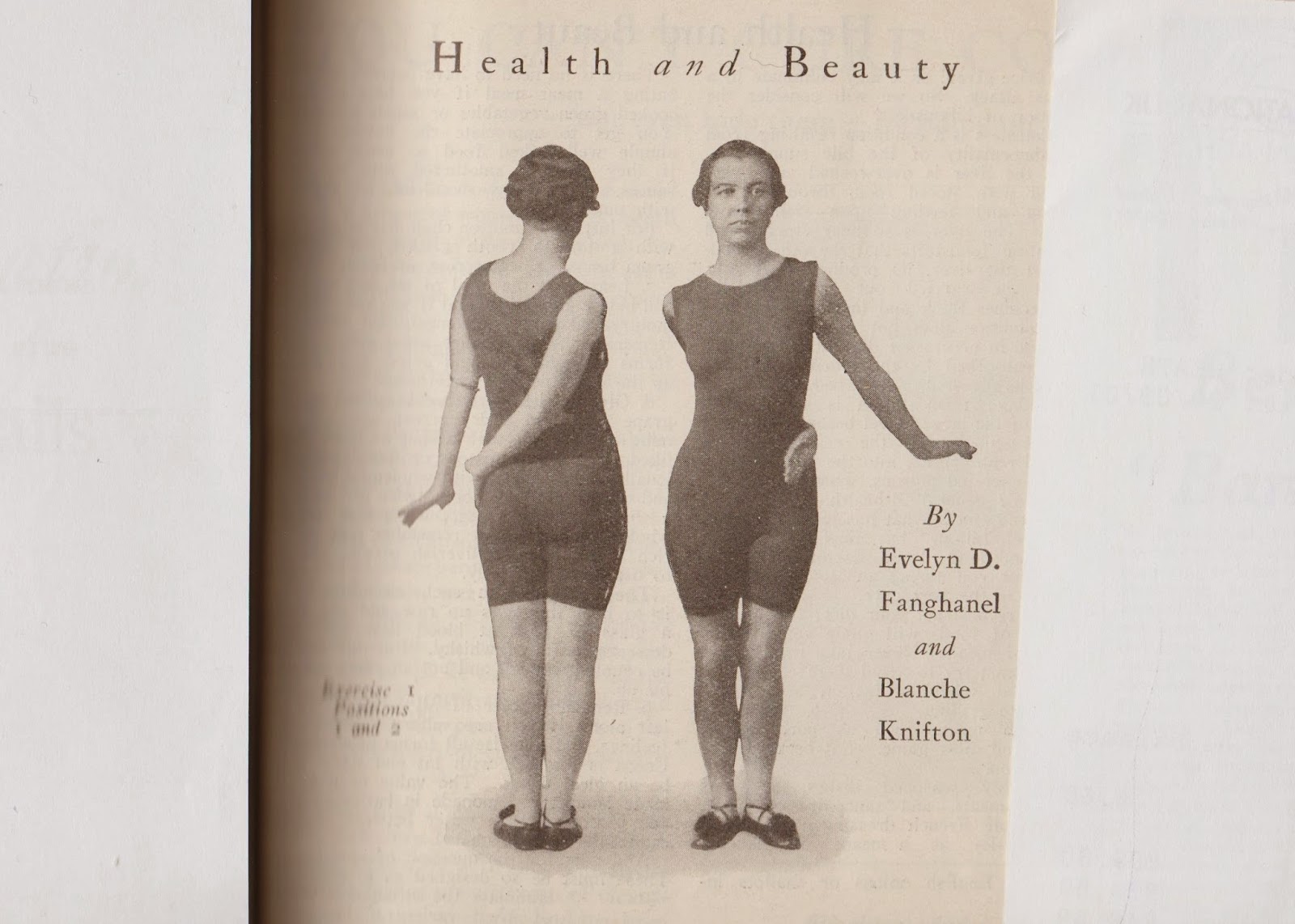 If we can free our instincts from the transient, often paltry ideologies they’re forced to serve, then we can discover, explore and celebrate the true nature of nurture and choose for ourselves how to direct it. I’d like to see the arena of power dispersed from a secular cathedral where men go to bray, to the heart of communities. Matriarchy – mother power, works best there. The alpha male instinct makes disastrous government. Men in suits bray hakas, play digital games with virtual money, and war hammer games with real people, with just enough smokescreens and spin to stay in power. They draw stonking salaries with fully funded kitkats. Women are in the field conciliating and cracking on, doing what’s best for the next generation. The matriarchal instinct is for welfare, the patriarchal is for wealth and war. The matriarchal is needed to bring the world back into balance.

So I asked a bonobo matriarch where to start. This is what she said: Find a safe outlet for alpha maleness. Sport will do. Make it men’s only form of self-esteem. Make 80% of male appearances in the media sports related. Give them an impossible goal, the lungs of Wiggins, the pecs of Becks. Bonus: it’s lucrative and you get a lot of buff men. Was her tongue in her cheek? Possibly.

Look At All The Women is now available to buy from: The Mother’s Milk Bookshop (as a paperback and PDF) – we can ship books around the world! and as a paperback from Amazon.co.uk. It can also be ordered via your local bookshop. If you’d like to get involved in the ‘Look At All The Women’ carnival please find more details about it here: http://www.mothersmilkbooks.com/carnival-2/ Please take the time to read and comment on the following fab posts submitted by some wonderful women: ‘Moments with Mothers and (Imaginary) Daughters’ — Cathy Bryant, guest posting at Mother’s Milk Books, shares more poetry from Look At All The Women — her own version of Rudyard Kipling’s ‘If’ and a poem inspired by her imaginary daughter. ‘The Cold Cup of Tea’ — Marija Smits shares some poetry that gives a glimpse into the everyday life of a mother. ‘Creative Mothers: You Need to Stop!’ — Georgie St Clair, shares an important reminder, that all mothers need to dedicate time and space to be creative. ‘The Mothers – Or Promises to My Future Child’: Kimberly Jamison posts to her blog The Book Word what she has learnt from her own mother, and writes an open letter to her future child. ‘Bonobos are my Heroines’: Ana Salote at Colouring Outside the Lines puts the nature back into nurture. Stephanie from Beautiful Misbehaviour wants to challenge society’s treatment of the post-birth body. Helen at Young Middle Age talks about finding strength from thinking about all the other mothers, during hard times.
Posted by Ana Salote at 13:59 3 comments: