On the way to my book launch I read How to be a Public Author by Paul Ewen. It’s comic gold. As preparation for an event - well it prepares you for any eventuality.

Francis Plug attends a string of stellar author events. Here he is at a Salman Rushdie talk:

‘My £8 ticket is equivalent to two and a half well-filled glasses of wine. So far I’ve had seven glasses, so I’m up. The wine table is unattended, so I help myself to another bottle before heading back into the theatre. Salman Rushdie looks over to me as I scuttle towards my seat. It must be distracting to have someone moving about like a frilled lizard while you’re trying to talk.’

'Perhaps we’re currently experiencing the golden age of author/reader interaction, but I suspect, for most contemporary authors, it’s nothing but a friggin’ nightmare.’

The night before the launch I take a sustaining draught of solitude. I like people, but I burn out on sociability. I revel in the singleness of my hotel room, the mini kettle with one cup, and the narrow bed. On the telly Florence (and the Machine) leans out from the Pyramid stage and touches drifts of hands. I don’t think I will need to be hoisted by security guards. What if no one turns up?

It’s June in England and it’s hot. English villages and fairs are made for each other. Girls have bows in their hair and stop mid run for two turns of a hula hoop. Chair legs sink into hot grass. Organisers look at their watches and move things. Tea and cake is served on mismatched pastel and flowered crocks. Winter feet are aired. Ants tickle. I have to make an effort to be nervous in such an atmosphere but I manage it.

I check the venue. It’s a small marquee. I recognise my publisher from her picture on line. She has very sweetly brought flowers (from her own garden) chocolates and a card. She gives me piles of books to sign. People enter the humid tent, sit down and wait. 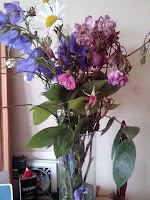 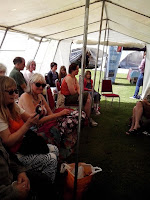 Oy Yew is a middle grade/crossover book, in other words it appeals to all ages. We pitched the talk at both children and adults. The tent fills with adults. I'm told it’s difficult to attract MG readers to an event unless the writer is already a big name. It's a shame. Like Francis Plug I have an anarchic inner child. I relate to children.

Thankfully the adults find enough content to smile, respond, take notes and buy books. No one darts between the seats like a frilled lizard. Perhaps if I offered wine...


What I learned and some advice for first time public authors.

Don't carry your flowers around all day. They will wilt.

If you do a presentation with a dog, people will look at the dog and not you. (The cartoonist, Brick, secured his dog to the altar of the chapel where he was speaking).

Eleven-year olds don’t decide to go to book talks. When taken by parents to culture, they trail. Eights and nines are more open. Children in schools are captive and will happily receive you as light relief.


Buy food before you get on the train else you will be forced to spend a large part of your advance on a packet of quavers.

I am now a public author. That means I am available for any event, anywhere. Lakes and mountains preferred.
Email anasalote@aol.com